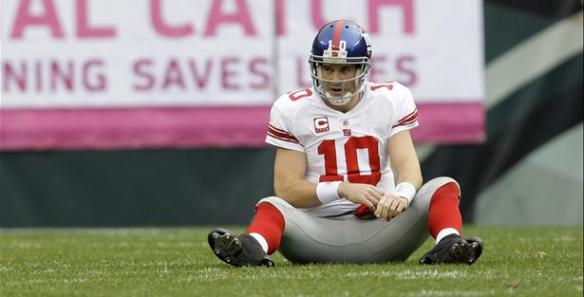 This clown won a Super Bowl?

2009 is all about offense. Ten of thirteen winners topped 30 points in week 8. You know it’s a high scoring Sunday/Monday when my shitty fantasy team breaks 90 for the first time. I’m sure that won’t happen again.

Savage Animal 93, The Negotiators 88 – For the second time this season, Savage pulls out a win on Monday night. Roddy White netted 16, which was just enough to overcome an 11 point deficit. The Negotiators continue to struggle despite owning Adrian Peterson.

Travelin’ Fools 65, Blind Monkeys 61 – The league’s top two teams staged a defensive throwdown. Steven Jackson’s first trip for six of ’09 proved to be the difference. The traversing idiots claim the best record at 7-1 with the win. Monkeys fall, but remain the Gulfman League’s highest scoring squad.

Lame Excuses 115, Steelcats 42 – The woodshed game of the week was downright embarrassing. Chris Johnson almost won it by himself. The reliable Drew Brees was the only Cat to score better than six points. Not good.

Veronica 86, Arkansas PurtyMouths 74 – The NFC South trio of Pierre, DeAngelo and Marques racked 50. LT reintroduced himself to the end zone twice, but it was not enough. Mike Sims-Walker posted his third goose egg of the season. At least he didn’t get suspended this time.

Furry Beasts 89, Walker’s Talkers 83 – The Furry ones started Ahman Green. Is this 2002? At any rate, it didn’t prevent them from notching a W. Michael Turner’s 21 on Monday night disposed of Walker’s chatty crew.

Syracuse ManahManah 84, Argentina Mistresses 61 – A battle for first place in the Carolina Division goes to the ‘Cuse. Donny Mac and MJD crushed it. Willis McGahee and Kyle Orton elected to extend their bye week into Sunday.

The fools earned a little breathing room in their quest to capture the New York Division. Meanwhile, the Carolina Division continues to be a jumbled mess.

Due to paid writing duties, I’ll have to cut this short. Here’s a quick summary of the week that was:

If you own a Saint, Eagle, Colt or Viking, start them no matter what – These four teams have sent a message that they can score points at will. All four got their bad week out of the way already.

The Bills, Browns, Raiders and Lions are the equivalent of fantasy swine flu – You want nothing to do with ANYONE on these rosters. This includes Calvin Johnson, who seems to have figured out he’s better off not playing on Sundays.

You can count on Brett Favre every week, until his arm falls off in December – Sixteen TD passes is tied for first in the NFL. With AP running roughshod on defenses, Favre is able to pick his spots without forcing balls into tight spaces (that sounded really dirty).

You can’t count on Eli Manning because he’s an inaccurate spaz – Eli’s “what me worry” face is high comedy. He misses the easy throws, but hits the miracle bombs. Anyone who thinks he is a top 10 quarterback doesn’t know shit about football.

Steve Slaton is the problem in Houston – After his fifth lost fumble of the season, Gary Kubiak sent Slaton to the showers. His replacement, Ryan Moats, who couldn’t make the Eagles roster a couple years back, did what Slaton has been unable to do thus far in ’09. He ran for 100+ and scored multiple touchdowns on the ground. Maybe this will inspire Slaton to pull his head out of his ass.

Beard Of The Week

Falcons second-year left tackle Sam Baker has more hair beneath his chin than he does atop his very large cranium. If anyone is deserving of a cameo on Sons of Anarchy, it would be Baker. I have no idea if he can pass protect or lead block on a screen, but if his glorious man mane is part of the criteria used when deciding who does or doesn’t earn a Pro Bowl berth, then Baker is a shoo-in.

Break Out The Iron Maiden

I’m two for two in iron maiden picks. First, Brandon Jacobs, then Matt Forte. Both survived their well-deserved bloodletting and turned in good performances the following Sunday. This week’s candidate is Anquan Boldin. Yeah, I know he’s got a bum ankle, but injuries have never stopped him from dominating in the past. He played last year with his jaw wired shut for Pete’s sake. He’s scored only one touchdown thus far and has yet to eclipse the century mark. A few days inside the maiden should more than do the trick.

Good news, folks. Reggie Bush and Kim Kardashian have reconciled. In fact, the rumor-mongers have informed me that Kimmykins is considering a move to the Crescent City. Apparently, she surmised life without a star athlete – even one who is an overrated bust – isn’t as peachy as she thought it would be. The paparazzi made it clear that her voluptuous tits and ass look much better sidled up beside a pro football player. Kim’s ass belongs in the Smithsonian. It is a miracle of science. I propose she be kidnapped, taken to a taxidermist and stuffed in a bent over position for future generations to ogle. This needs to occur pronto, before that luscious keister starts to resemble the bottom of an elephant’s foot.

I like this abbreviated format. Less work for me. Stud signing off.