Who saw this coming? The more things stay the same, the more they, well, stay the same. At least in the world of pro football, and for our purposes here at Stud Running Back, Fantasy Football. As if etched in stone by the fantasy gods themselves, the following commandments were written in Week 5.

2) Tony Romo threw a catastrophic interception that led to a Cowboys defeat.

3) Ryan Mathews exited with a concussion after three carries.

4) The Detroit Lions discovered life without Calvin Johnson is dark and foreboding.

5) Matt Schaub did this…

6) Brandon Jacobs did this…

7) Like of a plague of starving gnats, a reeking of awfulness Blaine Gabbert swarmed upon the Edward Jones Dome on Sunday, firing a pair of ghastly interceptions before mercifully leaving with a shredded hamstring.

8) Eli Manning did this…

9) Peyton Manning did this…

… and discovered one more way to thoroughly embarrass a professional defense.

What time is it? Time to pop open your Week 5 fantasy recap 12-pack. Oh, yeah!

12. The evolution of Eli Face 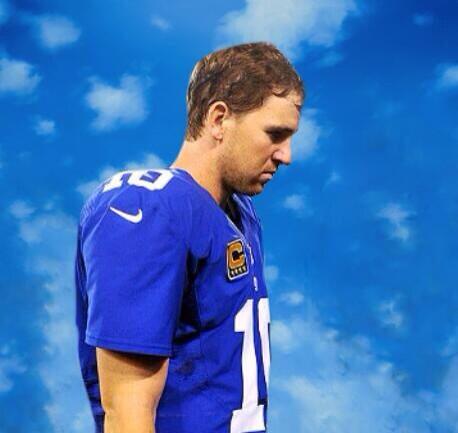 11. Deal of the century, or something

A blockbuster mid-season trade in Gulfman League? Unheard of! Sensing an impending collapse, the Bourbon Balls fired their drunken GM, who was recently caught in a compromising position at a rest stop off I-75, and made the unilateral decision to flush away half of their woefully underachieving roster. Looking to bolster their already scintillating squad, the Talkers eagerly opened wide and allowed the Balls to dip into their gaping pool of talent. When the coupling concluded, a five-for-five swap was agreed upon.

Forget about the trash, and there’s a lot of it stinking up this transaction. This trade basically boils down to Dez Bryant for Reggie Bush. By my calculation, the Balls got shaved in this one. Thanks for making the league’s highest-scoring team even better. Dick.

Things for the 1-4 Falcons aren’t about to get any easier. They don’t face a defense ranked outside the Top 10 until Week 13 at Buffalo. Julio Jones is likely doneski for 2013. Roddy White now has a tight hamstring to go along with his slow-healing high ankle sprain. Nobody knows when the hell Steven Jackson is coming back or how effective he’ll be when he does. Downgrade the entire offense. RIP Dirty Birds. Tony G shoulda stayed gone. At least the Thrashers look good… oh, never mind.

Halloween is coming up. Think I’ll go as the Big Bad Wolf.

Like my Uncle Pete used to say before he was hauled off to the pokey for running Ponzi schemes, fantasy titles are won and lost in the middle to late rounds. These fellas were drafted well below their current ranking, so pat yourselves on the back, fantasy fortune tellers.

Mike Vick (9th round, Talkers) – We all knew the gravy train would derail at some point. Congrats to those of you who had Week 5 in the Vick Injury Pool.

Jay Cutler (13th round, Bourbon Balls) – All Cutty needed was a brilliant CFL mind to resurrect his downward spiral career. If only the Bucs had hired John Hufnagel instead of Greg Schiano, Josh Freeman would be sitting pretty.

Jamaal Charles (2nd round, Assassins) – Leads all running backs in scoring. Let me repeat my sentiments from back in August: How the fuck does this guy slip to 15th overall?

Knowshon Moreno (Undrafted) – Dude was a sliver away from being cut in the offseason. Now he’s the number six runner. Gotta love Merica, land of second chances.

Fred Jackson (13th round, Massacres) – He’ll eventually break a bone or tear a ligament, but at present Mr. Jackson is outscoring C.J. Spiller by nearly 30 points.

DeSean Jackson (6th round, Massacres) – I passed on him twice because every year I’ve owned him he plays like a rotting corpse. Damn you Chip Kelly for knowing how to properly use a speed receiver!

Alshon Jeffery (8th round, Armpits) – Steal of the draft, lady and gents. Has more scratch than Marshall, Megatron, and A.J.

Jordan Cameron and Julius Thomas (Undrafted) – Only the venerable Jimmy Graham is better than this dynamic duo. By the by, Graham has 17 more points than number one wideout Dez Bryant.

7. Tom Brady is better than you

Sweet baby Jesus, what in holy Hades has gotten into Golden Boy? His haircut is straight outta MTV’s Buckwild, but his wardrobe belongs to an English Lit professor from a small northeastern Liberal Arts college. I’d like to believe this is Gisele’s handiwork, but considering Tommy is the face of Uggs for Men, it’s obvious he’s wholly responsible for his escalating douchiness.

6. Injury reports are for pussies

The Steelcats dropped the Massacres despite starting not one, but TWO players who didn’t even suit up. Stevan Ridley and Calvin Johnson looked awesome standing on the sidelines. Whatever. Who needs those clowns when Tony Romo is raining 500 yards and 5 touchdowns on Denver?

The Massacres decided to step into the quagmire known as the Patriots backfield, which of course ended badly. Brandon Boldin netted 6.4 points. Fred Jackson’s 21.3 points on Thursday night would’ve been helpful.

The Negotiators dusted off Doug Baldwin — who apparently plays for Seattle — and sat T.Y. Hilton. With Richard Sherman shadowing Reggie Wayne, Hilton eviscerated the rest of the ‘Hawks secondary for 140 yards and two scores. Doug Baldwin totaled 80 yards, which is respectable for Doug Baldwin because Doug Baldwin sucks.

The Pots could’ve started either Justin Blackmon or Denarius Moore and won. Instead, they rolled with Tavon Austin and lost.

Hakeem Nicks is human garbage, but sitting him against the worst secondary in football is inexcusable. Let me reiterate my advice from Week 2: START ALL RECEIVERS WHO PLAY THE EAGLES. The Petes should know better.

4. Let’s point and laugh at the Jaguars

The offense is averaging 2.04 points per game.

They are 28-point underdogs to Denver on Sunday. That’s the largest spread in NFL history. 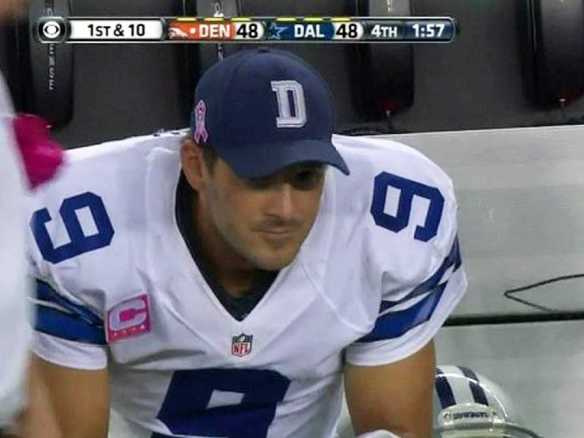 Nobody saw that interception, right?

Tony Romo (Steelcats) – Before Tony Romo did what Tony Romo was born to do (i.e. monumentally fuck up), Romo was killing it. If the ‘Cats roll with Brady, they are 2-3 not 3-2.

Terrance Williams (Monkeys) – Sticking with the Cowboys theme, the Monkeys plucked another gem from the scrap heap in Williams, who racked 151 yards and a trip-six. That’s Gulfman approved.

This seems fitting right about now.

Colin Kaepernick – Since Week 1, Kaep has yet to top 15.4 points. His receivers blow and he’s not running very much. Geno Smith has netted 20 more points. Look elsewhere.

Maurice Jones-Drew – Pray he gets traded to New England or New Orleans.

Larry Fitzgerald – Up next, Niners and Seahawks. Hoo-boy!

Eddie Royal – It was fun while it lasted. Get thee to a bench.

再見/再见, bitches. I leave you with this.