Football is one cruel bitch. When it’s over, it’s over. The Philadelphia Eagles’ 2013 season came to an abrupt end after Saints’ footie Shayne Graham split the uprights as time expired to send the Saints marching to Seattle, and the Eagles slinking into the depths of Lincoln Financial Field to begin the somber process of cleaning out their lockers.

For the long-suffering Philly faithful, it’s yet another year without a Super Bowl championship. Another crushing playoff loss to stew over for the next nine months. Another defeat to heavily scrutinize by playing the dreaded “What If” game. That said, once the disappointment subsides, there are numerous reasons to be optimistic about the direction this franchise is heading.

Lest we forget, the Eagles were chastised this time last year for dragging their feet in the search to replace the fired Andy Reid. Mike McCoy and Gus Bradley, among others, were interviewed for the job, but Jeffrey Lurie and Howie Roseman waited patiently for “their guy” to change his mind. Their guy being some Pac-12 coach with a fancy schmancy read-option offense.

Chip Kelly rebuffed the front office’s initial attempt to extract him from Oregon. Undeterred, the Eagles’ brain trust presented him with a second offer a week later. An offer Kelly couldn’t and didn’t refuse. The coach with no NFL experience and a wackadoo “college” offense was coming to Philadelphia.

The next several months were curious, mysterious, and a little frustrating. Every pigskin pundit under the sun had an opinion about Kelly’s chances of success at the professional level. Some believed he was in way over his head and would drown before September was done. Others lauded the hire as smart and revolutionary. 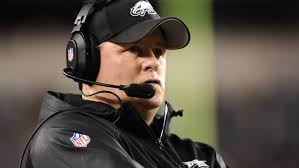 Spring turned to summer and the spotlight shifted to a training camp quarterback competition between Michael Vick and Nick Foles. The latter was good, the former was better. And so Vick was given one more opportunity to salvage his circus-like career. But that just the beginning.

What unfolded over the last four-plus months was exhilarating and unexpected. Kelly’s offense piled up yards and eventually points. Defensive coordinator Billy Davis’ 3-4 scheme shook off a horrific start to become a reliable, ball-hawking bunch. The special teams improved, although not enough to sustain future confidence.

Great, but not enough, So, what needs to be fixed? How can a 10-win team become a 12/13-win team? Well, the development of Foles, Johnson, Ertz, Logan, Fletcher Cox, Mychal Kendricks, and Earl Wolff will help. Re-signing Jeremy Maclin and Riley Cooper won’t hurt either. That’s all in-house.

The key to a number one or two seed in the NFC is free agency and the draft. Upgrades at right guard, OLB, safety, cornerback, and kicker are necessary. All the most recent Super Bowl champs have had at least two or three impact players on defense. Besides maybe Kendricks and Brandon Boykin, the Eagles have none.

Trent Cole works his ass off, but he’s 31, not a natural 3-4 OLB, and was largely invisible at Dallas in Week 17 and in the playoffs. Detailing the deficiencies of Patrick Chung would take 1000 words (I’ll spare you). Safe to say, he shouldn’t be back in any capacity because he’s terrible. Alex Henery isn’t awful, but he’s far from trustworthy. If a footie  can’t consistently drive kickoffs through the back the of end zone, he has no business being on an NFL roster.

The Turk is coming for you.

Personnel moves aside, adopting a nasty, take-no-prisoners attitude would be welcome. The Saints played bigger and badder than the Eagles on both sides of the ball. Can’t have that. Especially when you look at the 2014 opponents:

If the Birds want to reach 12 or 13 wins, they’ll have to beat at least five of the above teams, lose no more than two NFC East games, and not flop against Jacksonville, Houston, and Tennessee. Going unbeaten in the division would make the task easier, but that’s never a given.

Chip Kelly’s potent attack will be challenged by some of the league’s top defenses. Considering the lack of explosiveness displayed versus Dallas and New Orleans, there is cause for concern that defensive coordinators have “figured Kelly out.” And of course more adjustments are coming in the offseason with a full 17 games in which to study.

However, Kelly will adjust as well. His lack of stubbornness and willingness to adapt is what makes him such a great coach. He’ll devise new ways to attack defenses. An influx of new weapons should make an already scary offense even scarier. In theory.

A lot broke right for the Eagles in 2013. Nick Foles was out-of-this-world fantastic. None of the Week 1 starters were lost to catastrophic injuries during the season. They committed only 19 turnovers. They didn’t have to face Aaron Rodgers or Tony Romo in crucial games. Counting on the same fortune in 2014 is unwise. Injuries and turnovers are unpredictable from year to year.

Casting aside all the negative vibes, Chip Kelly and Howie Roseman have this franchise trending up. Considering the moribund state it was in twelve months ago, fans can’t really ask for much more than that.