Week 7 marked the halfway point of the 2014 fantasy football season. In lieu of the normal recap, it seems only fitting to hand out some well-earned hardware for what has been a brutal and strange seven weeks of fake football. Each of the 12 Gulfman League teams will find a gift in their stockings, although a few might not be pleased with Santa’s offerings. Enough jibber jabber, let’s dole out some major awards.

Are you ever going to bench Aaron Rodgers? No. So you start Wilson in Week 9 during Rodgers’ bye… and then what? Wilson doesn’t have malcontent albatross Percy Harvin around to fuck up the Seahawks offense anymore, so his value will never be higher. Dealing him to a quarterback-needy team to upgrade at receiver or defense would be wise.

Due to a horrific spate of injuries and all-around shittiness, the visually impaired simians have started six different running backs, including Ms. McFadden up there. Shockingly, McFadden has been one of the healthiest runners in the league through seven weeks. That alone should be a sterling indicator of how insanely frustrating it’s been to field a serviceable backfield on a weekly basis.

Best at concealing their identity – Cracker the Crab 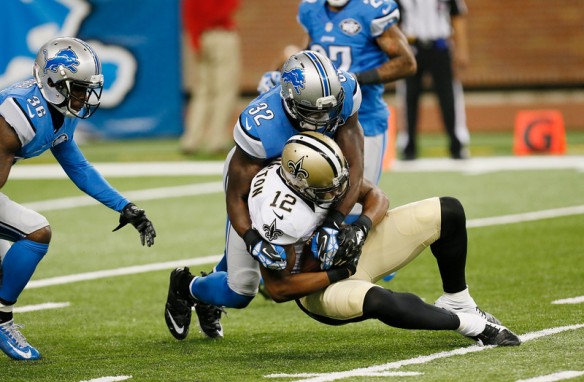 Is Marques Colston good or bad? What about Michael Crabtree? Or Alfred Morris? Or Tom Brady? Gio Bernard? Cordarrelle Patterson? WHAT ABOUT EDDIE FUCKING ROYAL?! Sheesh, this team is a big fat enigma. They should be a lot better than 2-5. Or maybe they should be worse. I dunno. Someone slap me in the face.

I loathe DeMarco Murray. Let me count the reasons why: 1. He’s a Dallas Cowboy 2. He’s smashing NFL records 3. He’s overshadowing LeSean McCoy 4. He’s a Dallas Cowboy 5. I don’t own him on any of my fake teams. All that said, I can’t help but feel a teeny tiny bit warm inside watching him steamroll defenses. Contrary to trending opinion, stud runners still rule fantasy football.

Best at getting burned by the Detroit Lions – Walkers Talkers

Rostering one Detroit Lion is ballsy. Rostering two Detroit Lions is dangerous. Rostering three Detroit Lions is DEFCON 1 status. The only situation more volatile would be owning four Oakland Raiders. If this ever comes to pass in the world of fantasy sports, we might as well kiss our collective asses goodbye because the planet will implode.

Foles. McCoy. Stacy. Allen. Garcon. Vinnie. This team would’ve shredded the league in 2013. Too bad it’s 2014. If all of these guys wake up at once, duck and cover. And since I’m the one facing the Pots in Week 8, I’m fully confident this will be the week they all decide to live up to their talent and pummel me into oblivion.

Barring injury, Andrew Luck and Jordy Nelson will likely finish number one at their respective positions. In non-PPR formats, it’s highly possible to seize fake glory riding the backs of two superstars. And having the kicker for the league’s highest scoring offense doesn’t hurt either. Yes, I just praised a footie. I feel sick.

Best at screwing with math – He-Rain

Because fantasy football is maddening and ridiculous, He-Rain is 2-5 despite scoring 23.4 more points than they’ve allowed. I blame Adrian Peterson and Ray Rice.

Think your signal-callers stink? I’ve got a pair of Redskins and a Jake Locker to make you think otherwise. At least Ryan Tannehill is respectable. Then again, this is Ryan Tannehill, so a collapse is most assuredly imminent. Colt McCoy is not the answer. Don’t do it, Beasts.

In hindsight, drafting Adrian Peterson and Toby Gerhart was dubious. Fortunately, the resurrection of 12th-round pick Ahmad Bradshaw and a trade for the severely underrated Matt Forte has salvaged my efforts. The other shoe will drop eventually, but it’s been one helluva ride so far.

The draft strategy was sound: steer clear of potential running back conundrums by loading up on receivers. Ah, the best laid plans. Alshon Jeffery’s slow start led to him being swapped for Lamar Miller because Knowshon Moreno and Ryan Matthews couldn’t stay healthy, and Chris Johnson did his best Chris Johnson impression. Toss in Jimmy Graham’s will-he-or-won’t-he-play routine and you’ve got a fantasy migraine. Nevertheless, the Blue Grassers are in the thick of the postseason hunt.

Leaving aside the Percy Harvin kerfuffle, the Dogs drafted Steve Smith, Odell Beckham, and Mike Wallace, and each is exceeding expectations as well as their draft position. Weiner also shrewdly plucked Jerick McKinnon from the scrap heap after learning of Adrian Peterson’s prehistoric methods of child rearing.

Stud Running Back will return…